With expansive porches, stacked-stone chimneys and marble countertops, tiny homes are challenging the American ideal that bigger is always better. In an Atlanta facing rising real estate prices and an influx of 2.5 million more residents by 2040, tiny homes are gaining traction as an alternative to the McMansions of yesteryear. 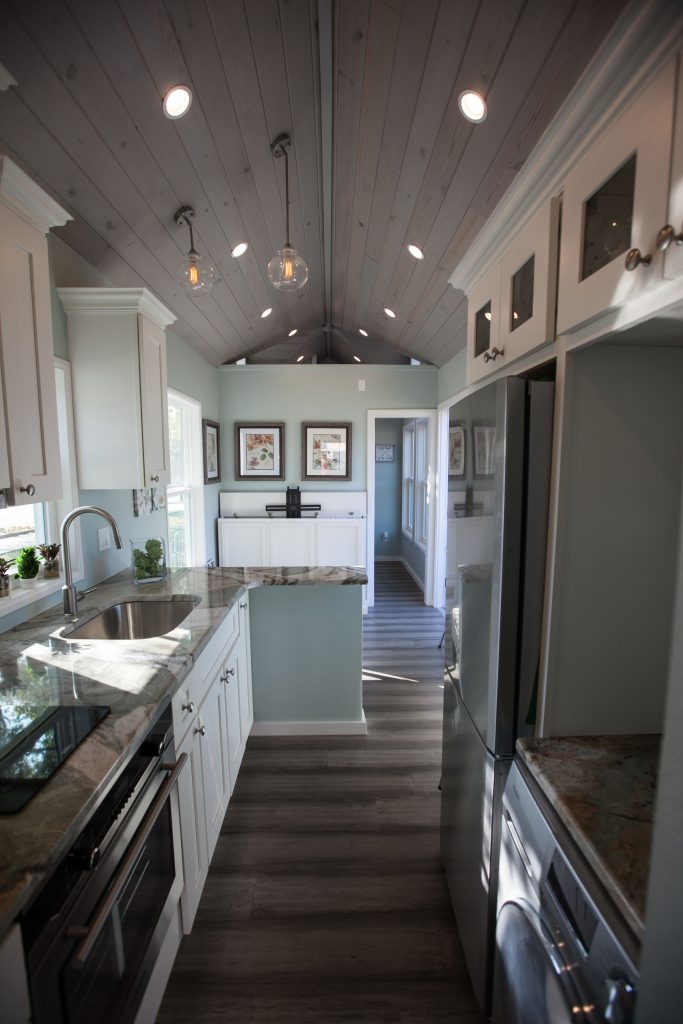 From marble countertops to pendant lighting, today’s tiny homes have all the luxuries of larger homes. Photo courtesy of Tiny House Atlanta.

Equally opulent inside, these micro cottages look like normal homes, only smaller and more intentionally designed. Every square inch is expertly planned with livability and storage in mind. Think elevated lofts, stairs that serve as drawers and kitchen bars that double as desks. Today’s tiny homes also feature stainless steel appliances, high-tech wiring and airy, windowed walls — everything you need to feel right at home. 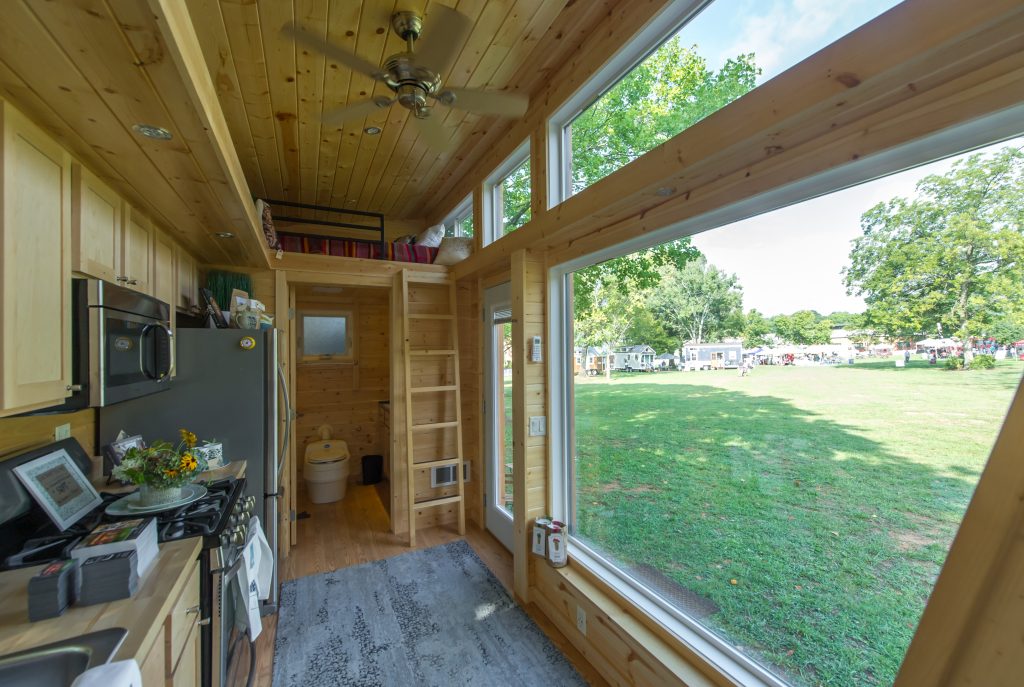 Unlike the trailers of yesteryear, tiny homes are airy and bright. Photo courtesy of Tiny House Atlanta.

The Trend of Living Tiny
The American dream has come with ballooning square footage — expanding nearly 300 square feet with every decade. In the 1950s, the average American home was a quaint 983 square feet. But by 2014, that number had more than doubled to 2,657.

With floorplans ranging from 400 to 1,000 square feet, tiny homes buck this ballooning trend. Why? Millennials.Born between 1981 and 1996, millennials are shunning ownership in favor of ride-sharing apps like Uber and house-sharing apps like Airbnb. And who can blame them?

Entering the workforce during the Great Recession, millennials faced high unemployment, mounting debt and an increasing cost of living. For many young people in this Lost Generation, downsizing the American dream is borne out of both conviction and necessity. 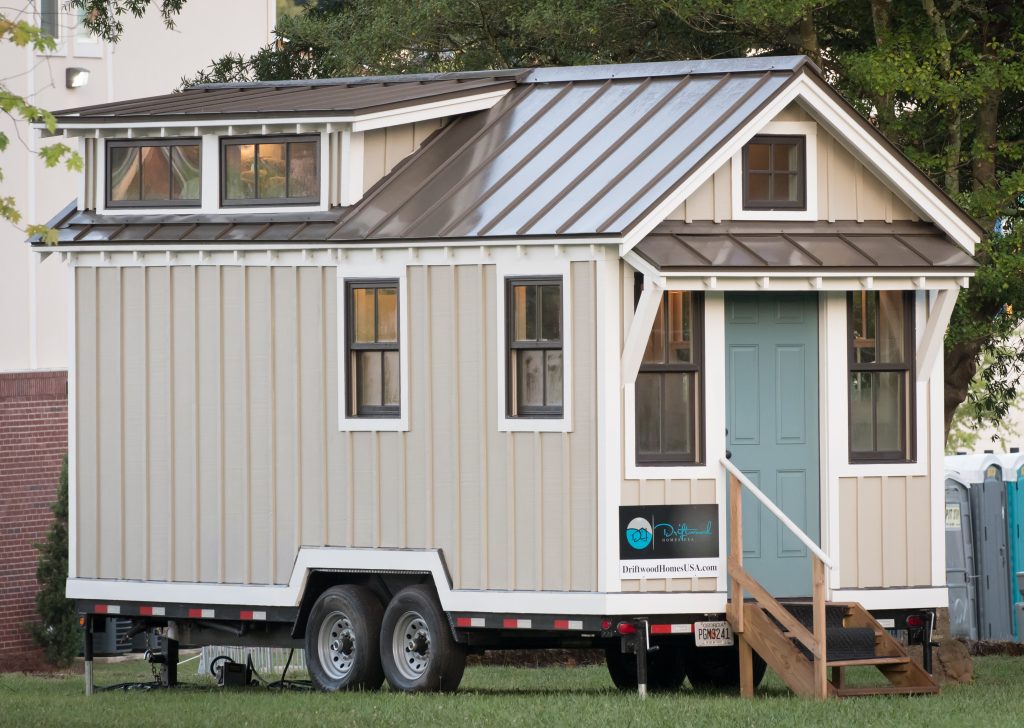 Millennials value experiences over material possessions. They want to follow their passions and create careers with real meaning. Have adventures, see the world and dine at the finest restaurants. Living tiny fuels this lifestyle.

And minimalism pays off. Sixty-eight percent of tiny house residents live mortgage free, compared to 29.3 percent of total U.S. homeowners. Nearly 80 percent own their own home. And they have less credit card debt and more savings than the average American.

Most tiny homes cost around $60,000, compared to the average American home, which rings in at $200,000. This price difference makes tiny homes a popular choice for adventurous millennials and empty nesters. 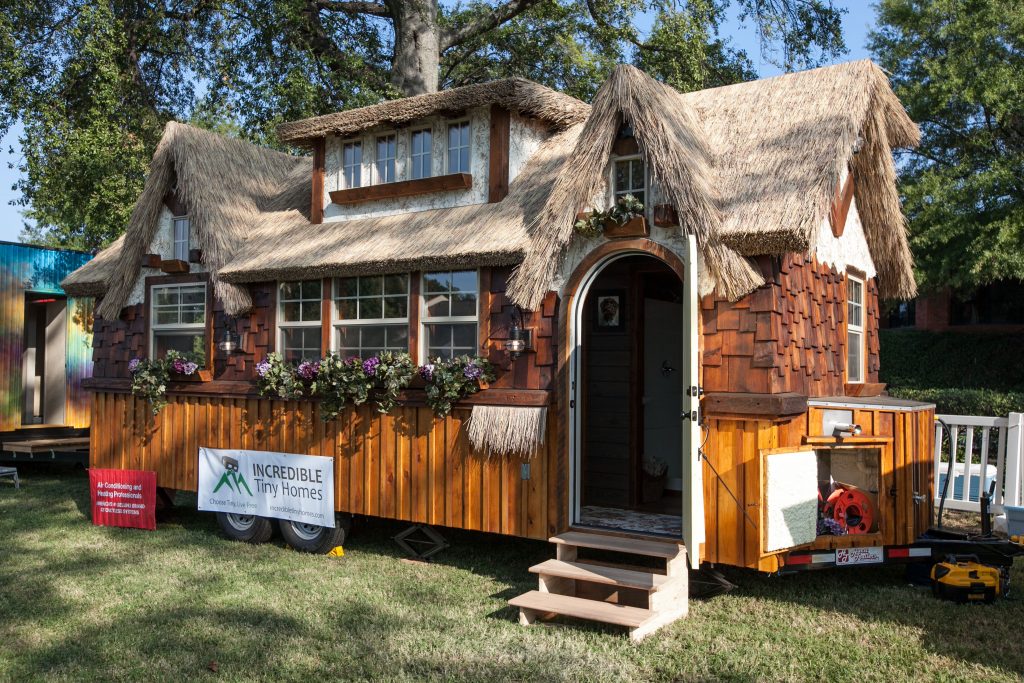 Atlanta’s Affordability Crisis
It’s no secret that Atlanta is on the rise. The Hollywood of the South and the world’s number one filming location, Atlanta is home to premier universities, 16 Fortune 500s and booming tech, medical and financial sectors.

Thanks to the world’s busiest airport, Atlanta has always been a business and mobility capital, but there’s something new in the air. Atlanta is increasingly becoming a destination city and an arts and cultural capital — drawing world-class restaurants, artists and attractions. With the help of millennials, the city is reclaiming its urban sea legs. The BeltLine has changed the face of Atlanta forever — increasing walkability, but driving up real estate prices along the way.

Add in 2.5 million more people by 2040 — making it the country’s sixth-largest city — and Atlanta is less accessible and less affordable than it has been in decades. This combination of scarcity and unaffordability is most pronounced in intown areas where attractions, walkable streets and mass transit abound. Proponents of tiny homes see eco-dwellings as the answer to problems surrounding affordability, space and scarcity. 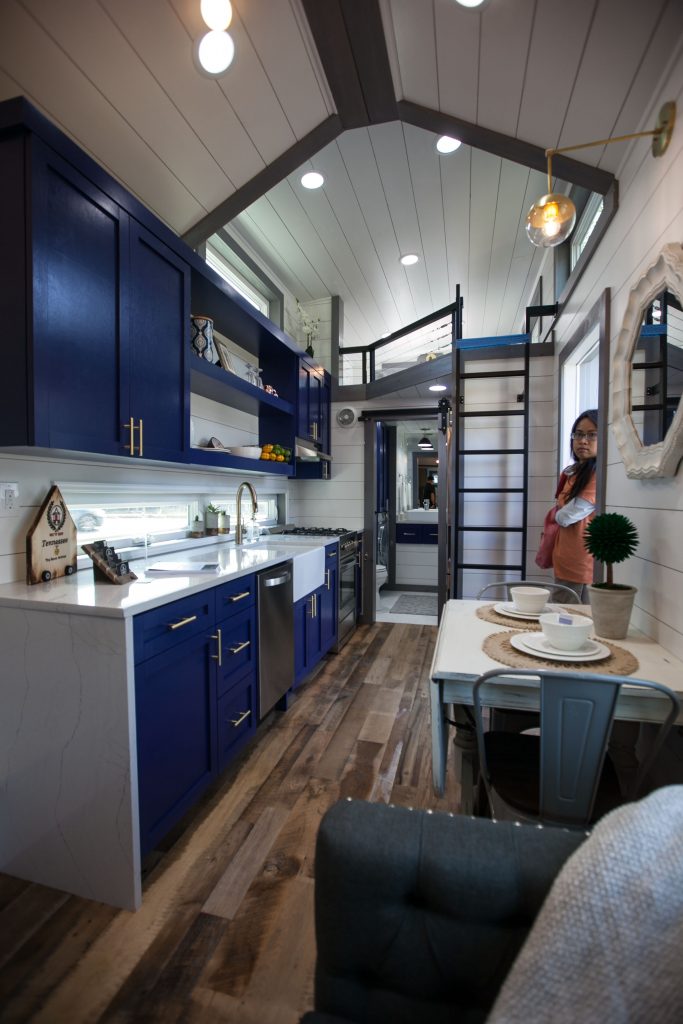 Tiny houses offer all the comforts of home, but at a much lower price point. Photo courtesy of Tiny House Atlanta.

Tiny Homes Take on Atlanta
Thanks to popular shows like “Tiny House Hunters,” “Tree House Masters” and Marie Kondo’s minimalist bestseller, “The Life-Changing Magic of Tidying Up,” living little has never been cooler.

Serenbe, a progressive community built around an organic farm, is capitalizing on this emerging trend by creating micro-cottages for its artist-in-residence program. Built from local pine trees, the Serenbe team hopes its tiny homes will serve as an inspiration for other communities. 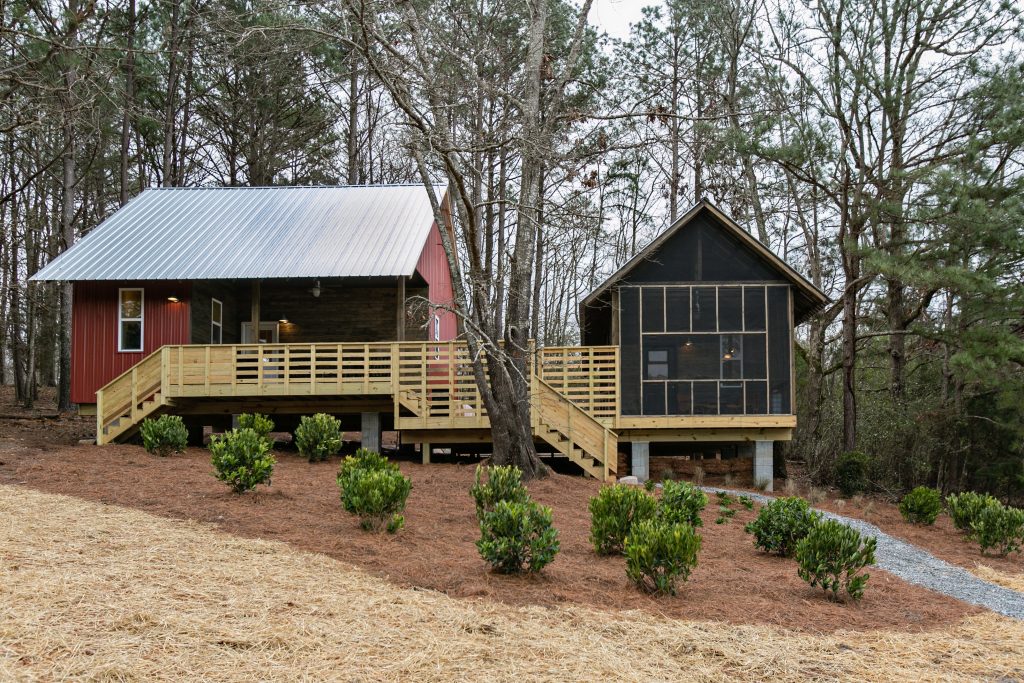 Serenbe’s Art Farm Cottages are a gift to the city’s creative community. Photo courtesy of Serenbe.

Inside the city, East Point’s Frog Hollow neighborhood is building a village of “eco cottages.” Clustered near biking and walking trails, woods and a shared garden, the homes range from 250 to 1,000 square feet.

While tiny homes have yet to make a meaningful mark on Atlanta, communities are cropping up everywhere, including the City of Clarkston. In an effort to foster affordable housing for millennials, downsizing boomers, immigrants and refugees, the city is building a tiny-home community on an acre of land near the center of town. 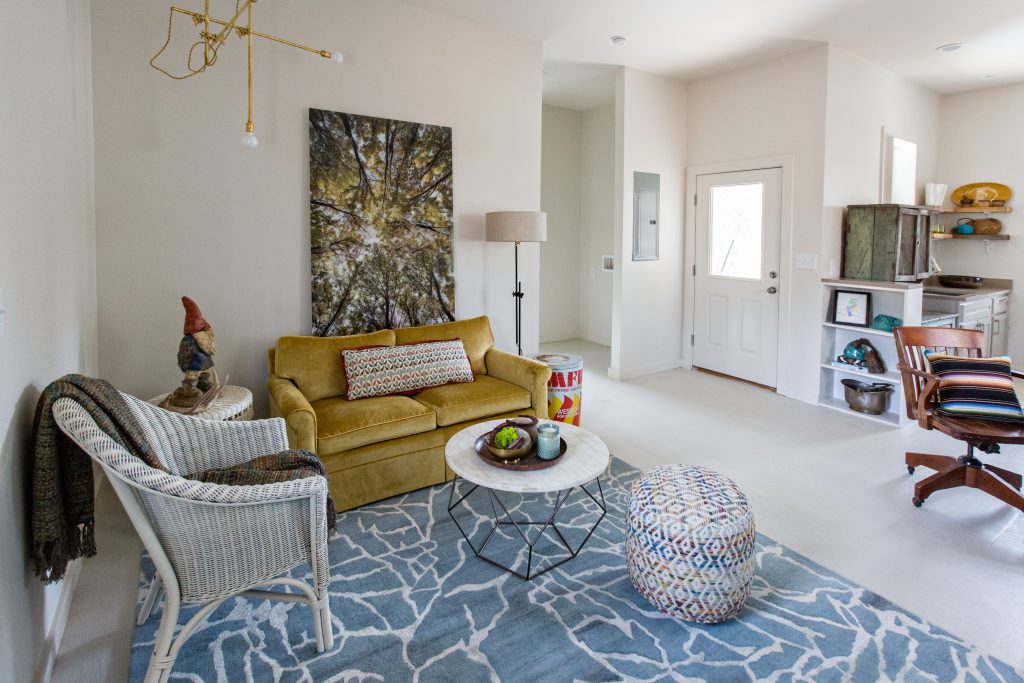 Tiny Homes Face Big Challenges
Known for its independent and artistic spirit, it’s no surprise that Decatur is one of Atlanta’s most tiny-house-friendly neighborhoods. In August 2015, the city changed its ordinances to remove square-footage minimums, allowing for a community of tiny cottages to crop up near downtown.

But in many parts of Atlanta, supporters of the Tiny House Movement face zoning and legal challenges. Cities across the state classify homes on wheels as RVs — relegating tiny homes to less-than-scenic RV parks. And many counties, including Fulton and DeKalb, have laws against building homes smaller than 1,000 square feet.

But there are signs that laws, zoning and building codes are changing. In May 2017, Atlanta’s City Council approved “accessory dwelling units” in the backyards of existing homes.

While the change only applies to lots that already allow for duplexes, many of these properties are located in highly desirable neighborhoods like Grant Park, Inman Park, Old Fourth Ward, Edgewood and Candler Park. Though the ordinance still forbids homes on wheels, many believe zoning laws could continue to evolve. 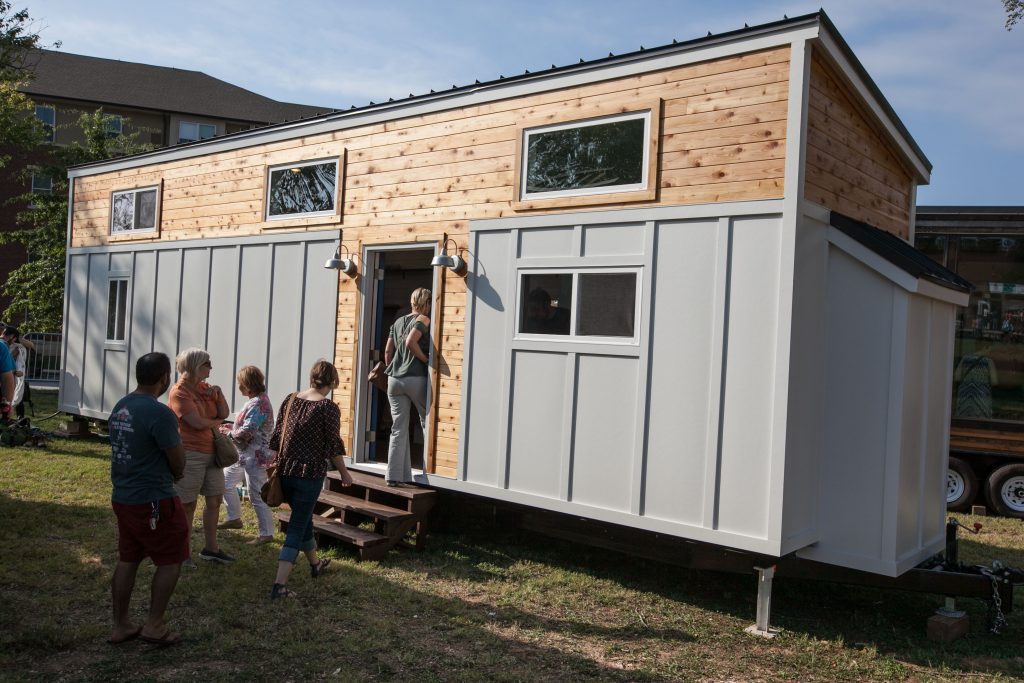 While tiny homes are technically “mobile,” they are nothing like traditional trailer homes. Photo courtesy of Tiny House Atlanta.

The Sunny Side of Living Small
As the red tape clears, tiny homes are expected to increase in popularity. They are, after all, eco-conscious, low-impact homes that cost less and require little maintenance.

Owners of tiny homes enjoy a smaller footprint inside and a larger footprint outside. Free of the pressures of a hefty mortgage, tiny house dwellers have more time and money to travel and do the things they love.

And since these homes are small, owners can’t cloister themselves away in their castles. They’re out in the community — greeting neighbors from their porches, working at neighborhood coffee shops and experiencing all the culture and nightlife Atlanta has to offer. 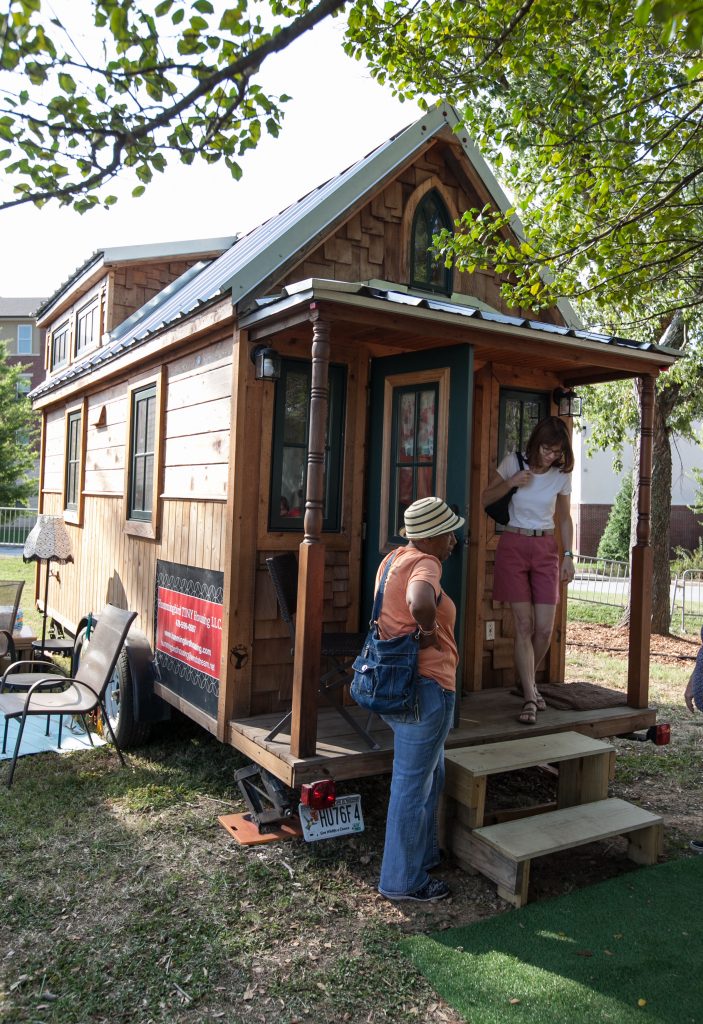 Where Living Small Falls Short
Are tiny homes a fad — like Pokémon GO and millennial pink? Or are they a real answer to Atlanta’s population boom and affordability crisis?

Living tiny is on trend right now, but close quarters can breed stress and claustrophobia, especially if multiple people call the same tiny house a home. For this reason, tiny homes are best suited for people at specific stages of life — people who aren’t bogged down with children and multiple pets.

While some Atlantan’s would welcome tiny homes by the trailer load, others worry about the impact they could have on neighborhood congestion and local housing prices. These issues could take many years to shake out. 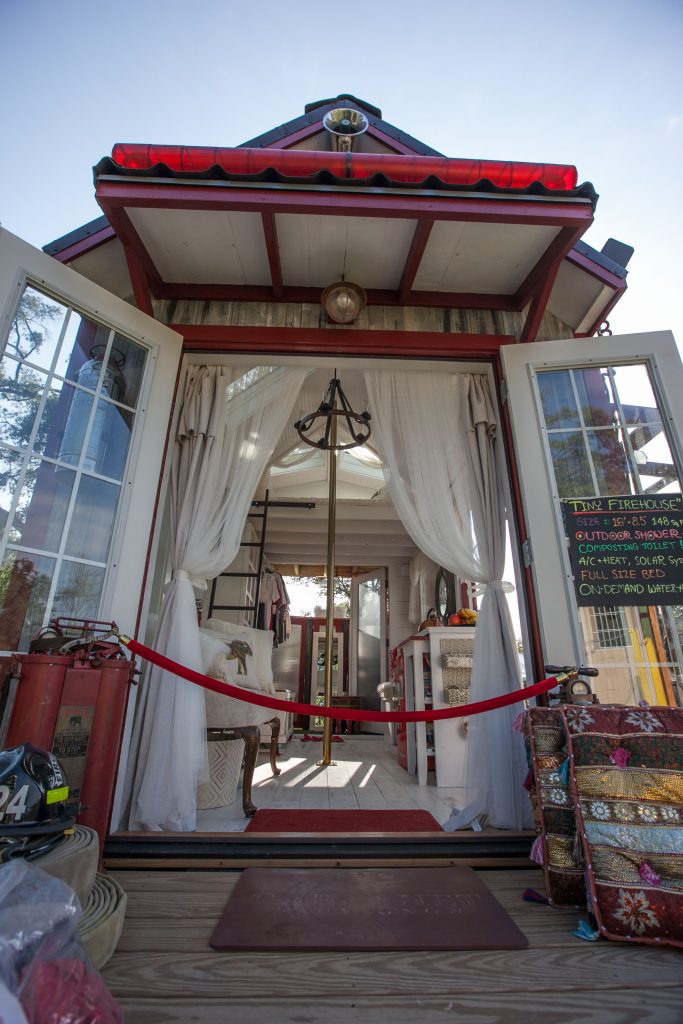 Tiny Housing’s Bright Future
One thing is certain: Atlanta’s tiny-house craze is showing no signs of stopping. Tiny House Atlanta is one of the largest tiny-house meetup groups in the nation. And the Decatur Tiny House Festival, held September 29 through 30, is gearing up for another record year of enthusiastic festival goers.

The movement is building up political advocacy groups, countless tiny living blogs and a bevy of tiny-house architects and interior designers, like Kronberg Wall, Cloudland and Archambault.

Proponents of tiny homes are striving for attainable housing. They want to reduce their space, maximize their time and reduce their debt. They don’t want to work jobs they hate to afford more house than they need. And while the movement is sprinting ahead of Atlanta’s zoning laws, the city is working hard to catch up. Tiny homes could soon revitalize blighted neighborhoods and add character and color along the BeltLine.

As Americans become more aware of the impact they have on the planet, minimalism and living small have become more than just buzzwords. It’s still too early to tell if the tiny-house hype lives up to the tiny-house reality, but these micro homes could fill a very real niche in the city. When it comes to the future of tiny homes in Atlanta, things are only getting bigger and brighter. 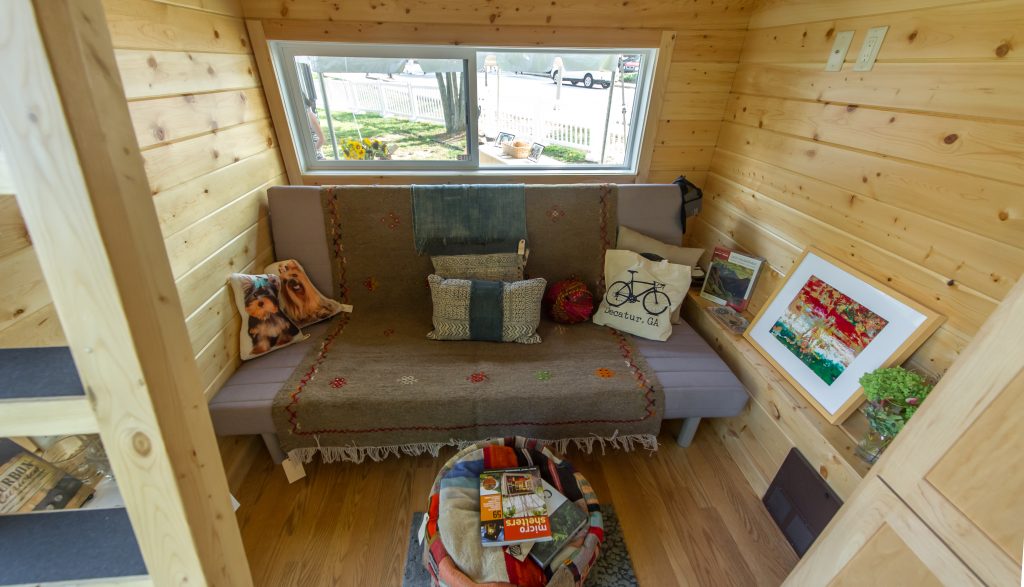